21.11.2021NewsComments: 0
SEAMANTS IN ROSTOV TRAIN
FIGHT FIRES AND PIRATES
For the sea to be safe, sailors need to go through fire and water while still on the shore!
Yesterday in the coastal Training and Training Center “Flagman” regular training sessions were held to improve the level of training of seafarers. How to extinguish a fire on a ship, patch up a hole in the bottom and even repel a pirate attack on the high seas – all this is being taught today in the southern capital.
SHOULD BE ABLE TO DO EVERYTHING!
At the intersection of the noisy highways of Krasnoarmeyskaya Street and Teatralniy Prospekt, between the columns of a high-rise building named on the maps of the Acropolis, attention is suddenly drawn to a sign with the image of a fit sailor on the ship’s bridge. An even more interesting sight will appear before you on the 3rd line, between Myasnikova and 1st Proletarskaya streets. Among the front gardens, fences and roofs, the gaze suddenly clings to a bright orange boat of considerable size, who knows what kind of wind blown a hundred meters from the Don bank. If you get behind the wall surrounding the boat (and in fact – a lifeboat), then it turns out that it is suspended on real davits right above the deep pool. And next to it, a team of serious men are donning protective suits, preparing for a training session on extinguishing a fire on a ship. Both the signboard with the sailor and the boat belong to the Flagman Training Center, only on Krasnoarmeyskaya is the center’s main office, and on the 3rd line – its training ground for practical training.
“Our center opened quite recently, in 2017,” says Dmitry Alekseevich Savchenko, director of the Flagman training center. – He has a specialized purpose: here are retraining professionals who have already taken place, those who have a variety of maritime professions. But, according to the requirements of international conventions, every seaman, from an ordinary sailor to a captain, is obliged to undergo professional retraining every five years and confirm this with international certificates. As you know, Rostov is a port of five seas, naval traditions are strong here, many sailors live. Helping them to improve their qualifications is the task of the “Flagman” training center.
While working in shipping companies, including onshore positions, Dmitry Alekseevich no, no, and he was faced with low training of some sailors. Experienced mechanic, navigator or minder, but does not know how to put on a wetsuit at all. But this is the first condition for survival if the ship is wrecked! As they say, God forbid that this skill is never useful in practical work. But a real sailor should be able to do everything!
– Our instructors still remember the times when the training of a specialist ended with the graduation from the educational institution. Further – independent training and ship drills. But new equipment appears, new systems, new means of rescue. And the increase in the rate of cargo traffic, the load on the crews leaves the captain less and less opportunity to stop the ship in the middle of the ocean and check how skillfully the crew will lower the boat or prepare the liferaft. A convention adopted by the International Maritime Organization required preparation in advance, ashore. But in classrooms, it is good to conduct theoretical studies, and students must “touch everything with their hands.” Therefore, a training ground was created, where there is a deep (three and a half meters) pool, boats, rafts and boats, other ship equipment, as well as simulators that reproduce emergency situations on a ship with maximum reality. The landfill on the 3rd line was built in September last year, and it took another two months to eliminate the comments and survey the facility by the Russian Maritime Register of Shipping (RMRS).
Of course, our center is not the only one in the city. But there are a lot of sailors in Rostov, and also Azov, Taganrog, Yeisk. For 4-6 months a person has not seen his family, but after returning from sailing, “without really coming to the meridian,” he has to run, sign up for courses, or even leave for two or three weeks to Novorossiysk, which is not at all close, so that for a short vacation have time to go through all types of training, – D.A. Savchenko, – that’s why the Training and Training Center turned out to be in great demand in the South of Russia.
SMOKE LABYRINTH
The senior technician of the “Flagman” training center Mikhail Nikolaevich Lapin is one of those who are called the “sea wolf”. In his household, like a good boatswain on a ship – every thing is in its place, everywhere is perfect cleanliness and order, and, of course, everything that is possible is painted. The latter does not apply to a special two-level smoke labyrinth, where a group of cadets entered. After all, paint poisons the air when it burns. Therefore the bulkheads are made of aluminum. But they are on special mounts, so that for each task, you can change the location of the bulkheads.
It was all serious. The captious instructor once again checked how the oxygen devices were put on, made sure that the metal cable passed through a special loop on the overalls, and tied the whole three into one link.
_ Remember that the location of the bulkheads is right-handed. Control the path with your right hand. Then descend the ladder to the lower deck. There are two hearths of open fire. Fire extinguishers in their nests where they should be. We liquidate the fire, and in the same way, in a bundle – to the exit. We do not leave each other in the smoke! – instructor Alexander Sergeevich Lavrushin gives instructions. 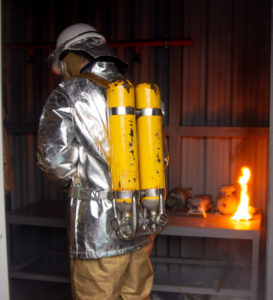 The sailors, who suddenly became firefighters, took their last breath of clean air and put on breathing apparatus. The door opened, and thick smoke poured out from there. One by one, bending down slightly, the cadets disappeared into the maze.
“It’s okay,” the instructor replied, intercepting my wary gaze. – Sham smoke, the same is used in theatrical performances. It is non-toxic and dissipates quickly. And it is completely harmless to health.
BRANDSPITE AGAINST PIRATE
A special article is the fight against sea pirates. According to D.A. Savchenko, the International Code for the Security of Ships and Port Facilities was adopted quite recently, but all seafarers now need to undergo such training and receive an appropriate certificate. In the East Atlantic off the coast of Africa, in the Indian Ocean, in the seas of Southeast Asia, such training can be very useful. And Mikhail Nikolaevich Lapin himself went to pirate-dangerous areas.
– We went on a large bulk carrier from Odessa to India, through Suez. Then Somali pirates plundered along the way. We stretched the Bruno antipersonnel spiral along the sides of our vessel; our crew included four special forces, armed with machine guns and a machine gun. And still, we felt relief only when an Indian military boat took us under his escort, – says Mikhail Lapin.
The anti-piracy course is very serious. Of course, it is better that this knowledge does not have to be applied in practice, but in reality, each crew member has his own responsibilities in the event of a pirate attack. And we are not talking about armed resistance, since it is forbidden for peaceful sailors to have military weapons. Before approaching the dangerous area, some sailors must unwind and fasten the barbed wire along the sides, others spread fire hoses and fix high-pressure cannons to prevent the boarding of pirates. The stuffed animals of supposedly armed soldiers are on display. In an attack, the radio signal is immediately carried away to the international coordination center, sirens and searchlights are turned on, the pressure of water is supplied to water cannons and foam cannons-monitors.
And if all else fails, and the pirates infiltrated the deck of the ship, the crew should take refuge in a well-protected area called the Citadel: there are supplies of water, food and medicine. An alert has been declared, the ship will be freed from pirates by ships of the International Anti-Piracy Force. This task will be simplified if there are no hostages in the hands of the bandits. Therefore, every sailor should know by heart what to do in an emergency.
– Over the past ten years, sea routes have become truly dangerous. Sea robbers do not hesitate to use weapons and kill sailors. Professional training will help reduce this risk – says D.A. Savchenko.
Coming out of the smoke maze, the cadets immediately unwind the fire hose. With strong water pressure, the hose is difficult to hold even with two people. Such a jet can knock down the flames of a fire, or easily knock down an impudent pirate who, with a machine gun in his hands, climbs aboard a foreign ship. 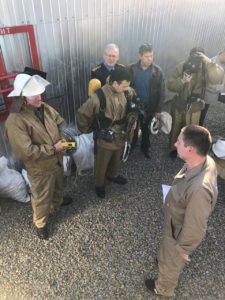 LEARNING IS NECESSARY ALWAYS!
Marine sciences are very diverse and there is a lot to be learned at the Training and Training Center. Plan a route “the old fashioned way”, using a sea map, without an electronic assistant, jump in a diving suit from a three-meter height into the water, return an overturned raft to its original position, climb into a rescue boat, and much more – a good sailor should know everything, from sailor to captain.
– We worked the winter with an open-air pool, and I think it’s good, because the training is as close to real as possible. I myself, being a sailor cadet, jumped from the deck of a training ship into the icy water of the Don in December. We already receive numerous responses from shipowners, they thank us for the high professional training of seafarers – says Dmitry Savchenko.
– Perhaps the Somali pirates will also send their comments if the students of the Flagship training center encounter them?
– Better to avoid it. We all need a peaceful and safe sea!
A. OLEENEV.
In the pictures: this is how sailors undergo training at the “Flagman” training center.